First of all aging sake is a passion! Either that or you forgot something in your fridge! Or it can be both. For me I love to set sakes aside to blow sake people away! Seriously. I have presented sakes that I have personally aged for over 6 years to owners of breweries from Yuki no Bosha to Hakkaisan. There must be at least 15 breweries that I have visited or they have visited me where I presented them one of their babies from a long time ago. It’s like a fascination reunion of sorts and it speaks to the sake geeks out there. 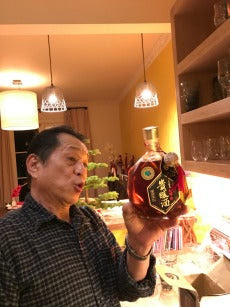 Some of the owners of the breweries don’t get it. They simply cannot grasp their Junmai Ginjo that is 8 years old. In fact it sort of bothers them. But some are so fascinated that they totally want to taste how the brews held up, improved, or fell off a little. They get great enjoyment in saying that they tasted their sparkling sake that some freak aged for 7 years. And so on!

I guess that this is a great off shoot of owning a sake store. Sometimes inventory falls through the cracks and the next thing you know you are looking at a 4 year old bottle of Junmai. Chuck it? Drink it? Nope! You age it further. My distributors are also good sources of sake agers! But they hate it! They don’t like sitting on product for years. It’s bad for their system and they see no scientific reason to do it. Often they themselves are negligent and just forget about inventory so it’s a blemish of sorts. Bottom line is that sakes that were not consumed “appropriately” make for great “Time Capsules.”

Ten year’s ago a very good friend gave me a bottle of Kijoshu from a brewery in Yamagata called Dewanoyuki. I was so impressed with the look of the bottle that I squirreled it away. So when I pulled it out last week for this importer who came to my house he got that look! WOW! He couldn’t believe it. He told me that the sake was three years old when he gave it to me and he was considering importing it along with the famous Hanahato aged Kijoshu, which had been introduced a year before then. He said that the Dewanoyuki was a really great kijoshu that had more complexity and flavor than the Hanahato, but it was more expensive so he didn’t import it. He said quite frankly that I probably had the only bottle outside of Japan and that he didn’t even think the brewery made the sake any more.

I love two things. I love the bottle of the Dewanoyuki Kijoshu and I love the look on the face of my friend who was simply blown away by seeing that sake again. And guess what? The tasting was even better than the seeing!