A Sake Tale - The Monkey Dance and The Sparrow Dance

Once there was an old woodcutter who went so far into the mountains to find wood that he got lost. He walked for a long time, not knowing where he was going, until he suddenly heard music in the distance and smelled the odors of food and drink.

Climbing up to the top of a hill, he saw a great crowd of monkeys. They were eating and dancing and singing, and drinking a kind of wine that they had made from rice. It smelled so good the old man at once wanted some. They sang and danced beautifully, much to the old man's surprise. Then one monkey took up a bottle made from a gourd, filled it with sake, and said it was time for him to be going home. The other monkeys told him goodbye and he started home. When the old man saw this, he decided to follow the monkey and see if he couldn't get some of the sake for himself.

Before long the gourd-bottle grew very heavy. So the monkey stopped and poured some of the sake into a jar. He hid the gourd with the rest of the sake in the hollow of an old tree, put the jar on his head, and went merrily on his way, balancing the jar carefully. 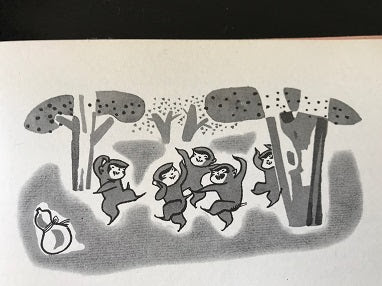 The old man had been peeping and had seen all this. When the monkey was gone, the old man said: "Surely he won't mind if I just borrow some of that wonderful sake." So he ran to the hollow tree, and filled a jar with some sake. "This is wonderful," he thought. "If it tastes as good as it smells, it must be very fine indeed. I'll take this back to my wife - if I can find my way home."

In the meantime, his wife was having an adventure too. She was washing clothes under a tree and suddenly noticed that the sparrows were having a kind of a party. They too were drinking something that smelled so good the old woman just had to have some.

So when the sparrows had finished dancing and singing, the old woman quickly tucked one of their gourd-bottles under her robe and hurried home. "I'll take this to my husband," she thought, "for if it tastes as good as it smells, it must be fine indeed."

No sooner had she arrived her husband appeared, having finally found his way home. "I have something to show you," they both said at the same time. And then one by one, they told each other their stories. Then they exchanged the bottles and drank the sake.

It tasted delicious, but no sooner had they drunk it when they both felt an uncontrollable desire to dance and sing. The old woman began to chatter and jump around like a monkey, while the old man held his hands out and chirped like a sparrow. First the old man sang: "One hundred sparrows dance in the spring! Chirp-a chirp, chirp-a chirp, ching!" Then the old lady sang: One hundred monkeys making chatter. Chatter-chat, chatter-chat, chatter."

They made so much noise that the man who owned the woods they lived in heard them and came running. There he saw the old woman dancing and acting like a monkey, and the old man dancing and acting like a sparrow. "Here, here!" he said. "This will never do. If you're going to dance, a woman's dance should be graceful and lady-like, like a sparrow's dance, and the man's dance should be bold and manly, like a monkey's dance. Not the other way around." 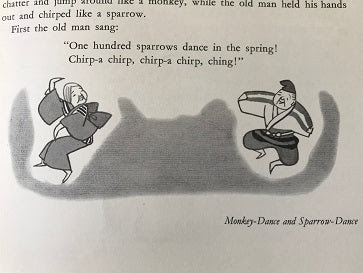 So the old couple stopped dancing and told their landlord the stories of their adventures. "Well, of course," he said, "you've each been drinking the wrong sake. Why don't you change bottles again and see what happens."

After that the old man always drank the monkey sake, and danced in a very manly way. And the old woman always drank the sparrow sake, and danced in a very lady-like way. Everyone who saw them dance and heard their songs thought them very lovely and started imitating them. And that is why to this day a man leaps about nimbly and boldly when he dances, while a woman is much more graceful and bird-like when she dances.