I’m not allowed to play favorites in the sake business. I’m supposed to be neutral, as a seller of sake. I’m supposed to say that I like all sake, and say something goofy like my favorite sake is whatever is in my cup! But it’s hard to not talk about some breweries that I like personally. It is no slight to other breweries or brewers, but I do have several breweries that are near and dear to my heart and more importantly my palate. The Tenzan brewery in Saga prefecture is one of these kuras. I’ve been selling Tenzan for almost 20 years and I am proud to do so! I’m also proud to sell another of their brands called the Shichida line of brews.

In the process of selling this particular sake I have become good friends with a great group of gentlemen, who have formed an importing and marketing business based on the fun of wrestling masks. Say what? Yes, these guys have taken an idea and have run with it to form the Sakemen team, who are regulars at SAKE DAY, and have representation by colors of their masks and in various parts of the US.

Herewith is Sakeman RED, Mr. Nick Matsumoto (yes they have human personas as well) introducing their new Fall Draft sake called Hiyaoroshi from the Tenzan brewery. Take it away RED! 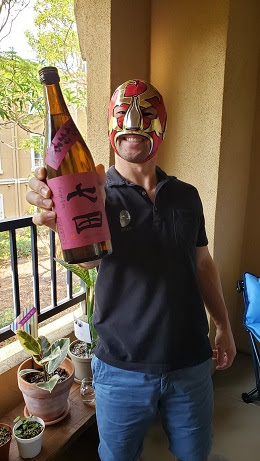 A small brewery in Saga prefecture is pumping out some serious, big flavored sake. But that's not all Mr. Shichida at Tenzan Shuzo is responsible for. More on that later. For now, let's talk about his Hiyaoroshi sake, "Shichida Aiyama 75." What's "Hiyaoroshi"? What's "Aiyama"? And what's with the "75"?

Lots to unpack here so let's keep it brief. Sake brewing finishes in the spring, that is when fresh, unpasteurized sake is available for the masses. Some of those brews are stored, aged, and then released at the start of the fall season. This rounds out the flavors and makes them even better pairings for food enjoyed during autumn, which tend to be fuller. 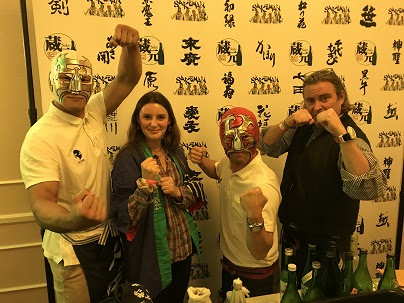 Aiyama is a special type of sake rice that is typically difficult to grow due to its large grains. These large grains, though making production quantities low, provide its robust flavor. Shichida san wants to grow the popularity of this rice to encourage more farmers to work with this sake strain so that it doesn't go extinct. Finally, to feature the flavor profile from this elusive strain, which is a perfect balance between Umami and sweetness with a slightly higher acidity, he only polishes the rice to 75%. This is a perfect rice for Shichida san. Thus, we have Shichida's Aiyama 75 Hiyaoroshi.

Lastly, Shichida san isn't only responsible for creating excellent, umami-filled sake. He also inspired the creation of the SAKEMAN! A team of luchador mask-wearing sake superheroes that want to bring "Sake to the World." They help spread sake joy wherever they go by donning their signature masks and introducing more people to this wonderful brew. Catch them on Social Media @gosakeman!