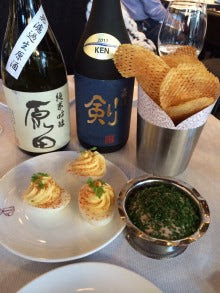 I am on a spiritual sake quest that will finally put a nail in the coffin of the "sake can only be consumed at a sushi restaurant" mantra. Wake up people! Food and sake go together - always have and always will. If it has a tail, roots, feathers, leaves, or a damn beak sake will go with it - anytime and any place. That is my quest - the place or origin of the cuisine does not matter. It can be Spanish, Italian, Brazilian or ughhhh British chow and sake will walk the walk.

Japan has chickens! Japan has salad! Japan has beef! Japan has spicy and savory dishes! Japan has sweet and salty fare, so why not think about having sake with these "tones" from other countries? The Sake Challenge is my way for you great consumers to see outside of the sushi paradigm, and to achieve this "new view on brew" I will usually select two different sake styles and price-points and bring them to a non-Japanese restaurant with a celebrity, sake-sleuth or hell even a friend in tow.

Read about past challenges here! 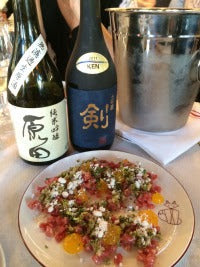 This month’s Sake Challenge featured Hiromi Iiuchi from Kuramoto Selects Sake Importers from NYC. Hiromi is one of the storied heroes of sake in the United States. She has been there in the sake trenches for over 20 years promoting sake and her fingerprint is very much on the success that sake has seen in New York City and all over the US. She has been very good for the sake industry and she is a great person.

Our Sake Challenge took us to the new French restaurant in Hayes Valley called Monsieur Benjamin and I selected two of Hiromi’s sakes from her portfolio that we sell at True Sake. Hiromi has a tremendous food palate and her sake palate is one of the best in the biz! She has been on two other Sake Challenges and she is a believer in the notion that sake does not only belong in a sushi restaurant. And away we go pairing sake with high-end French cuisine. 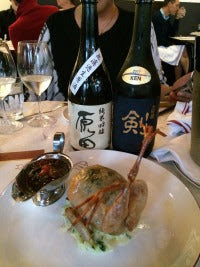 Would I ever take sake to a French restaurant again? You bet! Both brews did well and in most cases really well. We only had one DNW and that was close, so overall the combination of our starch bevrages with often salty and savory dishes worked together and harmonized in most cases. Overall I felt that the brightness and the bigness of the Nama Harada did better than the Daiginjo Ken. In most cases it absorbed the salty and savory elements and enhanced the dishes. That said Ken had that “WOW” moment with the steak tartare, which was totally unpredictable. Hiromi felt both sakes did well, but she leaned towards Ken being the better dance partner. Go tell a friend, sake pairs well with French fare!