One aspect of Sake Day that I am extremely proud of is that we push the envelope when it comes to all things sake. The list of “sake firsts” is pretty long with Sake Day and there are many more to come. Firsts? Really? Like what? (first of all don’t say like!) For example we basically invented the concept of Sake Challenge Stations. I have canvassed sake tastings in Japans for the past decade and longer and no public tastings have ever created blind tasting challenge stations that make the guests work! It has never been done! And as a better testimony many of our sake challenge stations have been used in private education courses here in the US and in Japan. 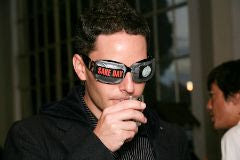 Why do the stations? It’s easy to taste a lot of sake and say things like “I like this!” “Hmmmm I don’t like this!” Boring! That’s why we created sake challenge stations that made you try to deduce which one of three exactly made sakes was the Junmai, the nama Junmai and the Junmai nigori? Or how about four sakes – covered – and the taster had to match the two nama versions to the two pasteurized versions of the same sake? Cool right? We also did a lot with SMV – which sake was “techinally” the driest of the three, with acidity – which sake was the most and least acidic, with amino acids, which has the highest and lowest etc. We created them to get consumers to understand and appreciate what they were doing!

This year is no exception as we will have three challenge stations including one of my favorites where you must find the same two sakes out of a line up of five sakes! Thinking while drinking people! What other “Innovations” with sake. Food people food! We have made Sake Day a large testing ground to push the sake with western foods concept. Of course we have had many Japanese influences in year’s past, but we have also done many “International Sake and Cuisine Pairings.” I am very certain that as a sake tasting event that we were the first to pair sake with sliders and BLT’s! That’s innovation people and Sake Day has been at the forefront of this movement to get sake out of the sushi and Japanese food paradigm. We are very proud of this component of trying to get sake out in front of the Japanese food influences and this has helped our sake concept bar called True Cup, which will open this coming holiday season!

Another innovation that Sake Day can take credit for is our “Try it, Like it, Buy it” same day purchasing program. This is a first in the large format sake tasting events. Never before have you been able to taste a sake and then buy it right on the floor for next day delivery. Talk about a win, win, win? Firstly the customer wins, because they get to convert their likes to action right then and there and they didn’t have to take a card and leave the event and hopefully find a restaurant that carried that sake that they liked! The importers and distributors win, because they are in the business of selling sake and they just converted instantaneous customers to the bottom line. And if course it is a win for Sake Day, because we generate more revenue to go to our beneficiaries at the JCCCNC!

And do you want a hint at this year’s “Sake Innovation?” What would you say if I told you that you could get chocolate sake cups filled with two amazing sakes that pair so well with dark chocolate semi sweet cups and milk-chocolate cups? Hello innovation 2015! Hello Tenth Anniversary of Sake Day!