But in 1871 a new government did away with this system and basically opened the market up to anybody who could afford a license and pay the taxes. The result was an explosion of sake brewers and it is often quoted that at this point in time there were 30,000 breweries in Japan. That was in 1872 and was a direct result of this action. Did it last? Of course not, because we are talking about taxes people and the Japanese government could not control itself. The famous Meiji government reversed this new rule and steadily increased taxes each year to levels that small breweries could not afford and voila. Just like that by the turn of century the industry was beaten back down to where only roughly 8,000 breweries existed.It’s hard to conceive but at one point in time taxation on the sake industry accounted for roughly 75% of all tax revenue in Japan. The sake industry was the engine for the economy and different governmental “regimes” tried different tax schemes to gain as much revenue as possible, as well as, to manipulate the playing field. Historically the government strictly controlled who they would sell sake making licenses to in an effort to favor large local producers. 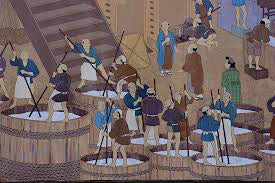 Another tax peculiarity in the sake industry was one that hurt my heart! Yes Siree! It literally hurt because it changed a dynamic that is very near and dear to my old ticker. Do you know how they historically taxed sake? By volume, you are absolutely correct. Is that what hurts? Nope. It’s when they taxed the volume. Huh? Contrary to logic the government taxed sake when it was produced and not when it was sold. Yup, you read that right! So remind me, why does this hurt? Well in short it was risky for sake brewers to make aged sake called “koshu” if they had to pay tax on something that might not turn out saleable or even good. And the result was many sake breweries didn’t age their sakes. Bummer!There have been other notable “tax issues” in the industry and I’ll name a few that may make some sense. Believe it or not, there are many sake breweries that produce sake for other breweries and not for their own brand. Yup! They often sell vats of their sake to bigger brewers who then in turn sell it under their brand name. Is this a lucrative deal? In a sense it used to be because they did not get taxed on these large vats of sake. They were referred to as “no tax sake.” A friend of mine who is a brewer said that his brewery used to do this a lot, but has recently discovered that their own brand sake sells more and makes more! 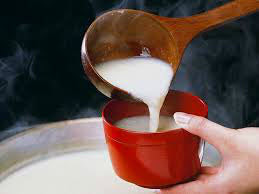 To help you with your own tax issues True Sake will take 15% off any sake in the store on the 15th of April! Just enter "Taxday2015" as the discount code if you are purchasing on-line. - Good on the 15th only!Okay! You want one more interesting sake tax tidbit? You know – real water cooler talking points? The government needed a good way to determine who paid taxes for sake and who did not. You know how they did this? They used their eyes! Come again? Yes, they simply used their eyes. You see, one way to determine if a brewery had in fact paid taxes on their sake was if the sake were clear, as in filtered, as in not nigori or cloudy sake. If the sake was clear that means they paid taxes on that sake. If a sake was not filtered then that means it was illegal or bootleg sake. Seriously, and yes you got it! It means that nigori sake used to be illegal. No way! Way! If the sake was cloudy it was probably made in somebody’s bathtub! Homebrew. Illegal sake! This rule was changed roughly 50 years ago when a brewery called Tsukinokatsura in Fushimi petitioned to make nigori sake legally! They took what looked like a garbage can and punched big holes into it and this was the filter. The sake filtered through the large holes and bingo, filtered sake emerged.