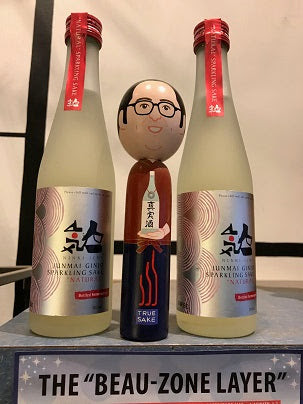 I’m just back from visiting this modern brewery in Fukushima Prefecture. The owner and good friend Yujin Yusa gave me a long tour of his brewery, and we really focused on sparkling sake production. I thought that I knew a lot about sparkling sake, but I was wrong! There is no such thing as secondary bottle fermentation in sake, because they don’t put any sugar or other starters in the brew to activate it in the bottle. But what I did learn is that they bottle sparkling sake while it is still fermenting, which is like an extended fermentation within the bottle. So it’s not a second and completely separate fermentation rather it is a carry-over fermentation. And of course some sparkling sakes have carbonation added to them, and that is definitely not secondary fermentation. The result is a very lively and in this case a very crisp brew that is clean and vivid. I love it! Pour it in a champagne flute and have some sparkling wine fare and you are set! Sparkling sake is not novelty, it is a great expression of the sake industry and the segment itself is taking off. Get your sparkling on!