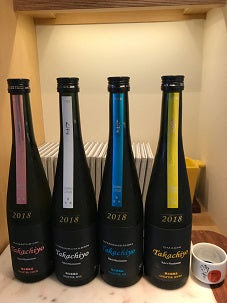 Takachiyo Chapter 4 “Hanafubuki”
From Niigata Prefecture. Junmai Ginjo Muroka Nama Genshu. SMV: +2 Acidity: 1.5
This next sake from Takachiyo, which makes sakes exactly the same way except for using a different rice varietal, has a lively nose filled with strawberry, vanilla, sugared nuts, and grape aromas. No. 4 is zesty, bright, brash and very lively like a fresh unpasteurized sake. It is loaded with creamy and tart flavors that jump around on the crisp flow. Look for hints of citrus, ripe peach, strawberry, plums and cooked cherries. Sounds like a lot and it is, and that’s what makes these sakes special. They have so many levels and layers to play with. The Hanafubuki rice makes this version drink very lively and very fun. WORD: Bright WINE: Zesty Reds/Acidic Whites BEER: Zesty Ales FOODS:More for drinking exploration but would handle spice, large complex flavors, and cheese plates.

Takachiyo Chapter 5 “Morinokumasan”
From Niigata Prefecture. Junmai Ginjo Muroka Nama Genshu. SMV: +1 Acidity: 1.6
The nose on the this sake, which is part of a series that can only be found outside of Japan at True Sake, has an extremely interesting collection of koji rice, melon, banana bread, and white grape aromas. No. 5 is smooth, round, rich, and has a little background zesty kick to it. It is bright, but not brash with much more balance and control in the mouth-feel. Look for flavors such as Devil’s Food Cake, fruit compote, coconut, and lots of lime and citrus. The strength in this brew rests in the richness of the flavors and the tingle of a unique “Margarita” play. The Morinokumasan rice varietal (which is a first at TS) makes this version of Chapters drink rich and round with a solid balance for a crazy nama! WORD: Rich WINE: Deep Reds/Full-Bodied Whites BEER:Creamy Belgians FOODS: More for drinking exploration, but would handle salty and savory grill fare. 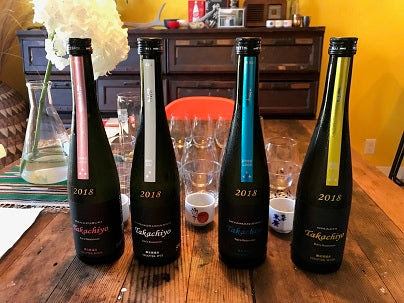 Takachiyo Chapter 6 “Miyamanishiki”
From Niigata Prefecture. Junmai Ginjo Muroka Nama Genshu. SMV: +2 Acidity: 1.6
Another sake from the very cultish Takachiyo, which makes this series of sakes exactly the same way except for using a different rice varietal for each separate brew has a very curious nose filled with honey, rice, oats/grains, and honeydew melon aromas. No. 6 is chewy, viscous, smooth, and dry. Look for rich roasted components of rice, toast, and honey. There is a very curious deep minerality that comes forth as the fluid warms with other hints of papaya and nuts. Sound crazy right? But it all fits together in a very deep and complex brew that is one of those head scratchers that totally appeals to sake geeks who love to explore the unknown. The strength of this brew rests in the questions that come forth with each sip. Did I just taste “Bit-O-Honey” the candy bar? The Miyamanishiki rice varietal makes this version of Chapters drink very mysteriously and hard to pin down. WORD: Complex WINE: Professional Reds/Mineral Whites BEER:Deep Belgians FOODS: More for drinking exploration, but would go with meat, game, and fowl.

Takachiyo Chapter 7 “Omachi”
From Niigata Prefecture. Junmai Ginjo Muroka Nama Genshu. SMV: -2 Acidity: 1.5
The nose on the this sake, which is part of a series that can only be found outside of Japan at True Sake, has a unique nose filled with roasted rice, toasted wheat bread, corn, cream, and yeasty rice aromas. No. 7 is rich, round, expansive, and savory. Be on the lookout for very rich and solid flavors such as marshmallow, sourdough bread, sushi rice, and very ripe apricot. This is a beefy sake with meaty and rich action all over the place. There is a refreshing astringency play (Shibumi) that brings all of the roasted and full-bodied flavors together. The strength of this “Chapter” is the undying richness that can almost be described as a reduction in cooking terms. The Omachi rice varietal manifests itself in the richness and solid like nature of this full-bodied nama sake. WORD: Solid WINE: Huge Reds/Vast Whites BEER: Stouts FOODS:More for drinking exploration, but would work wonders with steak, steak, steak!