Sake Royalty – What PM Shinzo Abe Poured Obama in Tokyo And Why? 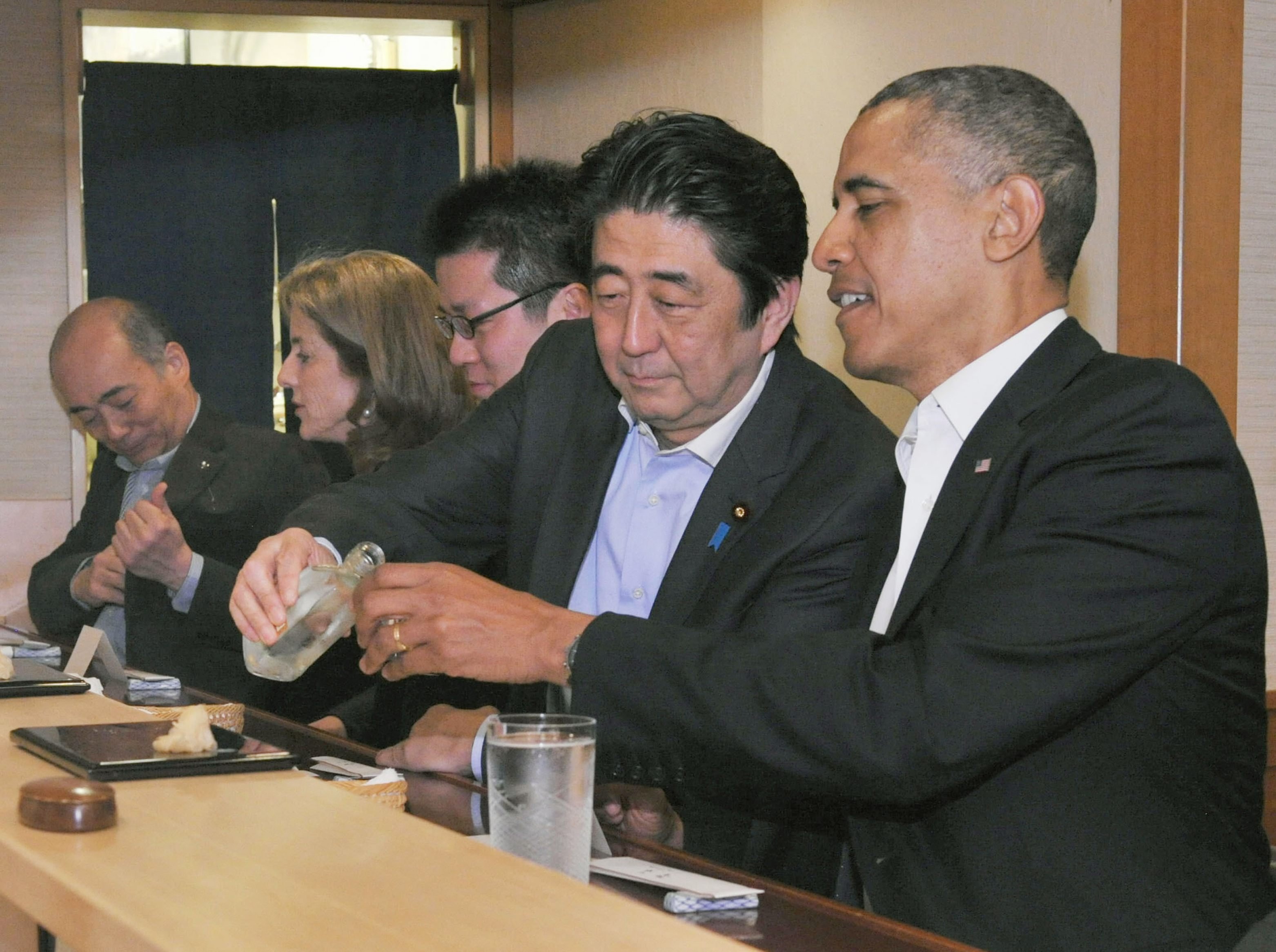 On his recent trip to Asia, President Obama met with Prime Minister Shinzo Abe in Tokyo. I am certain and feel it in my bones that at some point they discussed sake. It’s on the tip of the Japanese Government’s tongue as there is a strong push to promote sake internationally. Maybe they did or maybe they didn’t, but there is proof that they drank some sake together!

After their meeting, they do what most Japanese businessmen and politicians do, they went out to a restaurant to talk real business. In this case PM Abe took Obama to the overly-famous Jiro sushi bar in Ginza. Yes, it was featured in the movie “Jiro Dreams of Sushi” and apparently our President ate 10 of the 20 sushi offerings. But most importantly of all, they shared sake! Yeah!!! Prime Minister Abe poured some Kamotsuru Tokusei Gold Daiginjo (Kinpaku) to the fellow from America. Huh? Let me get this straight... Prime Minister Abe sitting at the ultra expensive Jiro sushi bar (only 10 seats) pours Kamotsuru for Obama. Is this a sake insult? Is this a sake diss?

Shinzo Abe could have poured a sake from the Tohoku area in honor of the earthquake and tsunami devastation three years ago, but he chose to pour a brew from Hiroshima. Yup! Hiroshima people! You know the area flattened by the US in an atomic knockout so many years ago. Hmmmmm! Of all the prefectures and all the sake out there, PM Abe threw down a sake from a region that was destroyed by the United States. Was this an act of “sake circle of life”? Was this a sly way to show up the President by saying, “Look we survived and we are better than ever now?” Is this a crazy case of a sake smackdown? 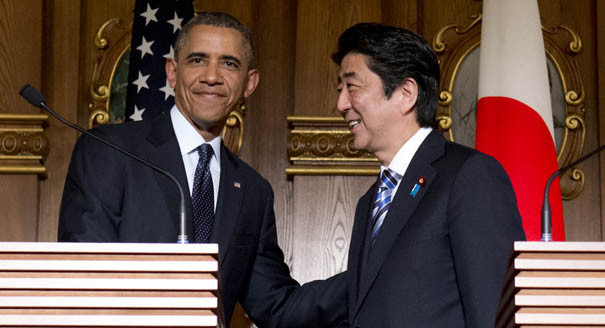 Hmmmmm! Perhaps the pouring of this particular sake was simpler than an international diss. Perhaps Shinzo Abe knew that Kamotsuru only places two pieces of gold foil in each bottle to honor cranes that mate for life. Two cranes together for their entire lives symbolized by two floating gold bits. Ahhhhhhh! Maybe his gesture to Obama was to show that both of our countries are trade mates for life. Those two floating pieces of gold represent trade relations for life between Japan and the US. Yes, that has to be it! That is the real reason why Shinzo Abe poured a very run of the mill sake in “industry” terms to the most powerful man in the world. Is that it?

Now another angle could be that since Kamotsuru is credited with making the first Daiginjo sake in the industry that PM Abe was trying to convey to his guest that he was tasting a historical shift in the sake making process. If this is the case then maybe Obama should have taken serious note, because this was a liquid tip of Abe’s hand. Without uttering a word Prime Minister told President Obama that their international trade relations were about to hit a major turning point and the trade industry would be forever changed between the two nations all through a cup of poured sake. My God! The Japanese are going to dump the Americans for a new era of doing trade with China and Russia. Listen to the sake people! Listen to the sake!!

Now of course we sell this particular sake at the store. So I charge each and every one of you to try this sake to see if you can determine what really happened in Tokyo. Maybe your very own Sake CSI will be able to unravel the mystery of why PM Abe poured this particular sake to the leader of the US at the most expensive sushi bar in Japan.