I used to blame the Hallmark Corporation for Valentine’s Day. I thought that they made up some patron saint of greeting cards, mini heart balloons, and those gross tasting candy hearts “BE MINE”! For sure it was some disingenuous backroom corporate ploy amongst a broad spectrum of businesses to make us gullible consumers fork over millions of dollars all in the name of love! Really?

Ask yourself, what do red roses and red boxes of chocolates have in common and what do they mean on every other day of the year? Just a red rose and just a chocolate! But Nooooo! On V-Day they mean EVERYTHING. We have been conditioned to place such a monumental meaning on these tokens and guess what? We do! 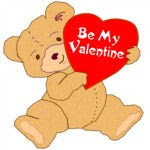 It is in this light that I would officially like to add sake to the list of ridiculous items that you must consider giving on Valentine’s Day, but not for the reasons listed above. No, sake is far too cool to be lumped in with red heart balloons, cards, and stuffed animals! From this day forth you will put a new true meaning to Valentine’s Day and you will celebrate this new understanding by giving sake for the right reason. But first let’s get the real story about Valentine’s Day to put things in perspective!

Who was St. Valentine? Some guy who ran around in a red velour jumpsuit handing out roses and heart shaped chocolates? I wish! With the help of David Kithcart (who I am shamelessly lifting some of this material from) I had an enlightening conversation with Father Frank O’Gara of the Whitefriars Street Church in Dublin, Ireland. I asked the stately old priest, is it true St. Valentine wore a velour jumpsuit? His reply was simply no and he informed me that St. Valentine was a Roman Priest in a very unusual time, made all the more difficult by an emperor called Claudias who persecuted the church.

Claudias was a real work of art who had some strange notions about mankind. One such hypothesis Claudias subscribed to was his belief that unmarried soldiers fought better than married soldiers, because they would not worry about their lives like a man thinking about his wife and children. So Claudias had an edict that prohibited the marriage of young people. Say what? So if I were in love with a person and wanted to get married I couldn’t! This sounds familiar. But it was true and there was one young Priest who thought that this was really not the way and he did something about it.

Valentine (he wasn’t a saint then) went on a mission to secretly marry lovers in complete defiance of Claudias and the edict. Ummm! This was a big no no. To go against an emperor’s edict was simply insane, or completely passionate, and that is what Valentine did. He put his life on the line so that those who were in love could marry, and nothing is more romantic than that is it? 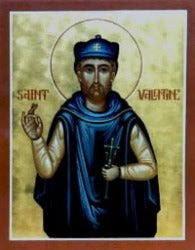 Well noble and passionate actions usually have consequences and as fate would have it Valentine’s actions were discovered by Emperor Claudias II, who eventually caught, imprisoned, and tortured Valentine for performing marriages against his edict.

In the year 269AD, Valentine was sentenced to a three-part execution of a beating, stoning, and finally a decapitation as a result for his defiance of Claudias and his stand for marriage. This is where I insert foot in mouth for claiming this Valentine was a man who jumped around in a velour suit. My bad! This man was indeed a Saint. Wait! I get it. St. Valentine.

“What Valentine means to me as a priest,” explains Father O’Gara, “is that there comes a time where you have to lay your life upon the line for what you believe.”

So when you give a gift for St. Valentine’s Day, give a gift that is as noble and true as the actions of this great man. Give somebody a bottle of sake and then ask them to marry you!