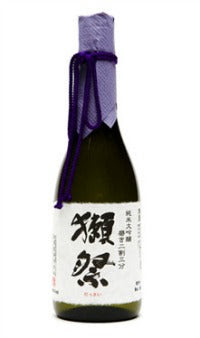 This Sake Spotlight comes from a huge supporter of True Sake and a real friend to the sake industry. Brad Russell has been doing the sake thing for years and I am honored to have his unique take on a very special sake called Dassai 23! Take it away Brad:

Your first love is unforgettable, especially when it’s a knockout.

Dassai 23 is a knockout.
It’s an elegant beauty, polished to perfection; it smells of fresh cut pineapple and wild flowers. The bottle’s dressed in a textured white cotton label with bold black kanji stroked across the front, the top wrapped in purple paper tied together by a darker purple, dangling, thin rope.

So, why did I make this choice? Dassai 23 brought me into the sake world. It was my first love. I had to know everything about it, and that journey began my sake education. Before my first intense affair with a Namazake, or sip of a Koshu, I went on a quest to find this mythical little 300ml bottle of Yamaguchi treasure, and that adventure sparked my passion for sake.

Thank you Brad and rock on! If you want to see some of Brad’s pictures they were recently printed in a local rag. Check out his FB page https://www.facebook.com/northcarolinasake