“Ask Beau” – “What would you be doing if you weren’t at True Sake?” 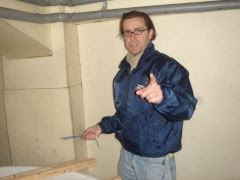 Oh! A personal question! Hmmmmmm! I think I’ll answer this with a fantasy. No, not that kind of fantasy you sicko! When the days are long and I’m tired with the selling of sake I fantasize about making sake. Yup! I think wouldn’t it be great to take 6 months off and work a brewing season? Many years ago, I co-founded the Mukune International Sake Brewing Program in Osaka Japan. We brought people all over the globe to work in a brewery making sake for a week. It was a very special moment in sake time. But, as I was a director I couldn’t relax and was continually running things. It was very enjoyable, but I couldn’t be a simple kurabito simply making sake.

To be honest – it was a very big deal for a foreigner to work in a sake brewery! I think Philip Harper was one of the first. Ten to fifteen years ago, I could count on one hand how many westerners worked real time in a brewery. It was certainly an exception yhen but today it is the norm. That is pretty cool, but it is also cause for some serious jealousy. There are probably ten westerners working in breweries as I type this. And I am envious of each and every one.