Labels mean a ton in the sake industry. Some brewers say that they don’t care a lot about labels as long as the sake is good inside the bottle. And yes that is what the owner of the super popular Dassai Sake Brewery once told me, “We’d rather spend money on making good sake then making pretty labels.” But, I would argue that they are the exception and not the norm. As most sakebrewery owners take their labels very seriously. 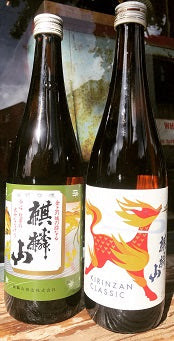 It doesn’t happen that often. And as retailers it surprises the crap out of us when it does! One second you are opening a familiar case of sake, let’s say Kirinzan “Classic” from Niigata. You expect to see that old classic label that looks retro and old, and SNAP the bottles have an entirely new label of what looks to be a horse dragon. Cool! It takes a second to process the change. Hey wait! I liked that old label. But I guess this new label is cool. And then it’s done and over with. The new label becomes the look!

Each sake label tells a story. It is a picture of the brewery in some capacity. It is the reflection of breweries. Take for example the Kotsuzumi brewery in Hyogo Prefecture. These guys are obsessed with their really cool labels. I mean really obsessed and it shows! I love their labels and bottles.

Their Rojo Hana Ari is a thing of beauty, and I am certain that this helps the retail sale for their brews. They are so damn good looking that people simply pick the bottle for the style. 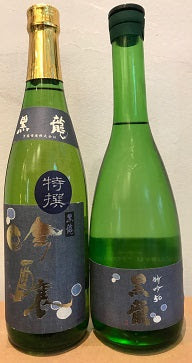 In speaking to many brewery owners labels are also a reflection of their communities, as they usually have a local artist, writer, or poet who is asked to make labels for the brewery. Then this person becomes the driver for all the sake labels to come. Some brewers take pride in the fact that they design the labels. Other owners don’t care. But they all do care about making money and being successful, so they do entertain “brand” changing campaigns in an effort to make their products more successful. I’ve seen several breweries overhaul their looks and labels completely. (Momokawa, Ichishima, Tsukinokatsura)

Some label changes just make sense. For 15 years we’ve sold Suigei, which is a great sake with a great nickname “The Drunken Whale.” How fun is that? So, where was the whale on the label for the past decade? It wasn’t there. And subsequently very few customers actually picked up the sake as a point of purchase “buy” according to its looks. Now the sake sells itself, because they added a whale! Want to see what the label used to look like? Check out our store online at our website

HERE: Ha Ha! How bland was that? (Yes, that picture will be updated soon!) 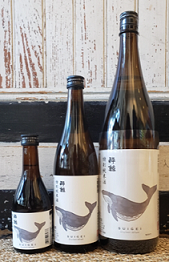 This may sound a little vague, but I don’t like calling out breweries negatively. It’s not my place to challenge the call of a brewery owner, but having sold close to a million and half bottles of sake I do have a unique perspective when it comes down to retailing sake. I have not been a fan of all label changes, but I don’t say anything if I am not keen on it. That said, we just experienced the first “NO WAY!” label change and I had to do something about. 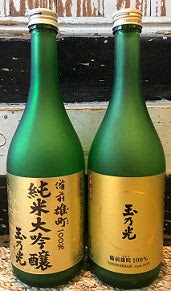 A certain brewery literally took one the best labels and replaced it with something that is totally wrong for the product. The new label might work on another sake, but not on our brew. The True Saketeam members all had the same recoil response, and I had to reach out to the importer with a massive “why?” The good news is that the importers are in full agreement. It simply does not work. They even offered to pick up our case of 12 bottles and replace the labels with the old ones glued over the new ones. (We will still do that!) Again, we aren’t trying to bash the brewery, but taking one of THE coolest labels in sake and replacing it with something that just doesn’t fit needs to be addressed. Hopefully they will hear the market!

Next time that you are in True Sake take a look around. No, I mean really take a look around at the labels. They all tell different stories, and I feel like the ending of that masterpiece movie called “The Last Samurai” who is looking at cherry blossoms. He previously stated that, “You could spend a lifetime looking for the perfect blossom, and it would be a good life.” But at the end of the movie he sees the trees and trees of blossoms and states that, “they are all perfect.” I feel the same way about sake labels.