I’m a sucker for a good story. I’m even more of a sucker for a good story about sake. That is why last November on my trip to Fukushima Prefecture I was blown away by one such story. You know the framework. You know that a massive earthquake hit Northern Japan on March 11, 2011. And you know about the carnage that followed with a historically terrible tsunami that pulled much of the area out to sea. Death and destruction is a terrible thing, especially when an entire town vanishes. There is no good. There are no silver linings. There is just pain and human suffering and that sucks.


But life is a good thing, and miracles do happen, and as I sat in the Fukushima Technology Center in Aizu I was spellbound listening to a really good story. I’ve seen many slideshows about sake breweries. They all are cool and always interesting for me as I am always fascinated by all things sake. But before me, on the screen was a picture of roughly 30 full bottles of sake stripped of their labels, beat up, and standing on a damaged wooden platform of sorts. The words “Our Sake that were collected by local people, after the disaster,” were written in black letters under the picture. It is truly one of the most powerful images that I have ever seen in the sake world.

Without going into all of the hurtful details Mr. Daisuke Suzuki, President of the historical Edo Period sake brewery Suzuki Shuzoten at the Port of Namie Town (makers of the very popular sake “Iwaki Kotobuki”), humbly said that his brewery was gone. He briefly described the earthquake with slides of terrible images and maps with circle rings of destruction with his brewery and town in the smallest and most damaged circle. It gave me the goosebumps. But then Daisuke let his shoulders relax, smiled, and talked about the recovery. And what a story!


Nothing is ever peachy when somebody says, “Because of the nuclear accident we had to evacuate the area,” but again he smiled and said that we relocated to Yonezawa City in Yamagata Prefecture to a brewery that had recently closed. And then he smiled again. And trust me when I say that these were little smiles, still very humble, and incredibly inspiring to see. All was not lost is a pretty cool statement. And in the case of Susuki Shuzoten all was lost. Or so they thought. On April 1st (Not a joke) they got a call from the Fukushima Technology Center that changed things forever. Daisuke said that the call was like, “A silk thread falling from the heaven to help us. At that time, we were desperately looking for everything to find a way out.”


The call was from the king of Yeast in Fukushima Prefecture Dr. Suzuki (another Suzuki) also who is literally known as the Kobo-sensei (Kobo means yeast. Sensei could mean teacher, master, instructor.) Dr Suzuki called Daisuke literally out of the blue and told the family that he had a large portion of their proprietary and historical kobo in his freezer. He reminded them that they had submitted samples to the laboratory two months before the earthquake and he was in the process of isolating the individual yeast samples so they could brew once again using their own yeast. It was literally like hearing that a family member was still alive. Well, sort of. Let’s just say that to a brewer, Daisuke is also the Toji, learning that their yeast was saved and still alive was like a gift from heaven.

Life changed for the Suzuki brewery. They were now making sake in Yamagata Prefecture under the brand “Iwaki Kotobuki,” but it wasn’t Fukushima. They are from Fukushima and their heart remained there still.  But business is business and the Iwaki Kotobuki brand started kicking ass. (I asked later if the sake people of Yamagata were good to them, and he said absolutely, but he bowed his head and said it still wasn’t home.) So with one foot in the Yamagata sake market and his heart in Fukushima, Daisuke felt a serious calling to help his original home. He felt that he had a duty and a responsibility to help Namie Town. 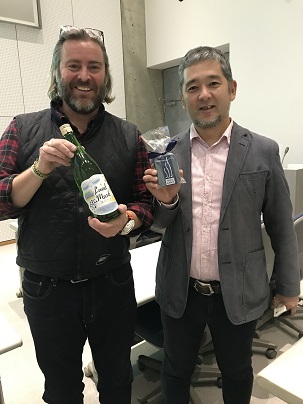 In a word, Daisuke wanted to make sake in his hometown again and set out to do so. He started working with local farmers who started cultivating rice again. He worked with the Fukushima Prefecture Sake and Shochu Makers Association to gain certification of clearance of his water supply from radioactive materials. And he started a PR movement to get Namie Town back on the map.


Daisuke Suzuki finished his presentation with a bottle of sake. He held up a bottle of Land Mark and said, “It is a sake made with a wish that it will be a signpost built upon the Namie Town producer’s thoughts for safety.”  Basically he did it! He was holding a Junmai Ginjo made with 100% Koshihikari rice from Namie Town, Kobo TM-1 from their own Fukushima original, and pure underground water of Namie Town. All you radioactive freaks out there take note. This brew is exactly what it would be like in 1830. And as Suzuki-san said, “Our sake has dignity, and we hope to make sake that gives a lingering flavor and touch people’s hearts. We want to tell all who taste it the background why this sake was called “Sake of the Namie’s Sea.” 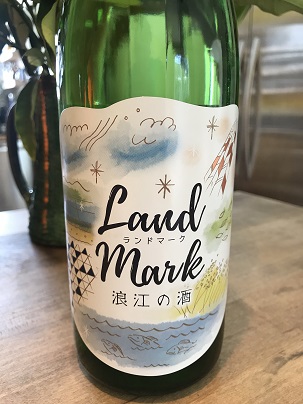 I love the story and I love the sake. It’s just another thread in the fabric of the sake tapestry, but it’s an important one. On my trip to Fukushima I learned that the Prefecture is really split into three parts with three distinct food philosophies. The seaside is the least represented by sake breweries so this effort is incredibly needed to keep the essence of Fukushima seaside sake alive. I look forward to helping Daisuke Suzuki in whatever way that we can, including exporting his products. I also look forward to telling you more about Fukushima, especially about the Fukushima Technology Center that was not only at the heart of yeast studies and storage for Fukushima, but also the fact that it was the epicenter and ground zero for all of the radioactive testing after the Nuclear power plant leakage. This building and the team of amazing people who populate it are one of the main reasons that Fukushima has rebounded so well today. It’s a huge success story.