There is a large movement in the sake world to create and brew sakes to share more wine-like qualities. High acidity, big presence, fruit forward, light pasteurization are all ways to make a brew drink more in the wine silo. Some breweries are actually using French wine terms in marketing their sakes. 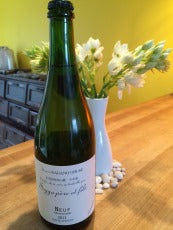 Oddly when I am out drinking with sake brewery owners they always want to try these “crossover” sakes to see what they taste like. More often then not they are always impressed and give their seal of approval that does not send these efforts into the “novelty” category.

I find them to be interesting and as a sake warrior I must defer to the “elders” and follow their lead of acceptance. I have always liked sake being sake in its own niche, but since the wine world doesn’t treat sake with respect maybe this is a pathway for total world sake domination.

In this regard we usually have a few of these types of brews in the store that have these wine-like qualities, BUT for a very very limited time – 8 bottles – we have of one of the top sakes in this crossover category, and it’s NAMA! Wow!

There is a famous brewery in Nagano that is actually a winery, but historically it was a brewery that lost its sake brewing license during the war. Huh? Yes, bear with me it’s a good story! The Soga family started a small sake kura with a brand name Izumitaki in 1867. They made wonderful sake that was loved and cherished by the locals. And as stated during the war the government made this brewery and many others stop using rice for sake, which essentially meant they had to quit their livelihood.

So with no license to make sake and lots of land the Soga family decided to grow grapes and produce wine. They did this and of course did it well, making wine that is very well regarded. But, Mr. Soga was still pissed off that he lost his family’s sake brewing license, and wanted to do something about it. In an effort to get the license back he went to the tax office over 100 times and usually went first thing in the morning wearing a “morning” outfit that would eventually lead the tax folks to say, “Here comes the morning guy.” 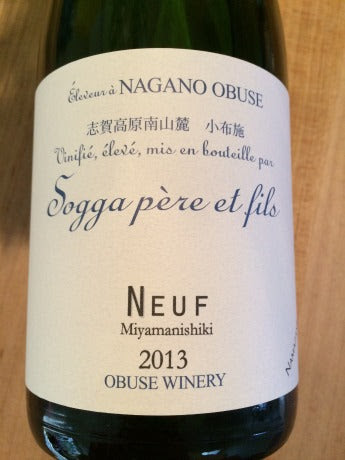 Mr. Soga’s persistence paid off and he eventually won the sake license back and the Obuse Winery became the Obuse Sake Brewery again. But this time making sake became a hobby for Mr. Soga out of his love for sake. They make very little profit on their sake line and their financial existence is still dominated by the success of their wines. Again, however, Soga’s passion for sake and the fact that wineries are closed during the winter has allowed him to become a sake maker again and that is okay with him.

Our offering from Domaine Sogga uses only local Miyamanishiki rice – think terrior – milled to 59%. And it is called “Neuf,” which as you know is French for 9. Why? They use the famous kobo, or yeast, #9 for the production of this Namazake. I tasted it for the first time and was extremely aware its presence. It has attitude and drinks with so many layers of flavors, and has a gentle acidity that gives it that wine-like structure. There are plenty of fruit tones and a larger white wine glass brings forth the proper flavor dispersion. Stunning stuff!

We will only sell one bottle per person and of course it is first come first serve. And if such “story” sakes like as this speak to you then perhaps you may want to consider joining the Black List. If so, please email blacklist@truesake.com with Black List in the subject line.