Ask Beau – “Do you dream about sake?”

This is a truly funny and unique question, which I could write about for hours, or even make a Jiro-Sushi-like movie called Beau Dreams About Sake, but I will go for the short-form on this Janice from Napa. 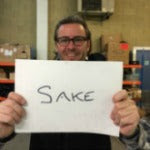 The simple answer is yes! And it varies. There are times when I actually have bad dreams about sake and people who do not honor it. I will fitfully sleep dreaming about people in the industry who try to manipulate sake for their benefit rather than for the betterment of sake. Why? Because many times I or my business suffers directly from the actions of a few people or companies and it is worrisome to me and probably comes out in my subconscious in the wee hours of a peaceful evening.

But mostly I have wonderful dreams about sake. I have dreamt about making sake, and actually have found myself moving my fingers as if I were mixing koji mold into steamed rice. I once had a dream about sake brewing water, in which my friend who owns a brewery told me that their water was so good that he wanted to make huge ice cubes of it and ship it to arid regions in Africa. (I may have had too much sake that night!) And I always dream about the smells of sake from the rice being steamed, to the actual aroma of the breweries, and from the smell of day old koji rice to the actual bottlenose of sake.

Sake is and has always has been a safe spot for me - very much like my children. So more often than not this plays itself forward in my dreams and predominately they are splendid filled with wonder and usually humor. Of course there are the moments when I have not so nice dreams about danger and the well being of my kids (and sake), but these are the exceptions. Sake is so positive and special how could you not dream about it?