So I had a very good question to answer this month. “How does the amino acid level effect sake?” but too many people asked about our new concept bar project that I probably should use this very “personal” space to reply as to what’s going on with True Cup. In a word – lots! 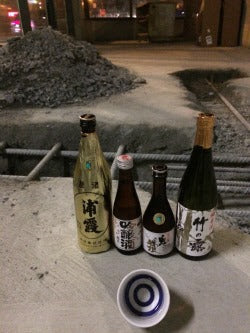 We recently “broke ground.” (Despite being in the position to do so since late in the summer). No negative whining here! We are plowing ahead! Plowing concrete to be exact! Ha! Our first action is to trench the concrete in the front of the space to allow for underground water piping. This is rough work. Dusty too! But it’s the start! Our start and any dust and sound is welcome, because that space has been too quiet for too long!

What does this mean in terms of timing? Since we missed out on hiring the mystical group of construction elves who work 24/7, which would mean we could open up in three weeks, we are probably looking at February! I’ll be a decade older, but also a decade wiser. And I’ll be putting the wisdom to use on the menu creation and pairing with Chef Michael Black’s amazing cups! (This was a tease here, did you catch it?) You can follow our progress at truecupsf (Instagram) and I would peek into the space sooner rather than later! Why? Because when the dust settles we will soon be putting a wrap on our very large windows that is simply awesome. You won’t be able to see “in,” but these wraps will give you an amazing view on sake in a really fun and creative capacity. (And we also have included a few tips on how you can better prepare for the arrival of True Cup, by getting several “Kits” from True Sake.)