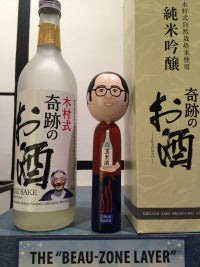 Okay – since the Beau-Zone Layer is about sakes with stories, I felt like this brew is a story worth sharing. There was once an apple orchard in Japan that grew okay apples. Not great and not special. As hard as they tried they could not up their game. Then one day they invited a legendary farmer/cultivator named Kimura who developed his own growing technique called the Kimura Natural Cultivation Method. And voila! From that day forth those apple farmers have grown legendary apples that are famous throughout Japan and are called “Miracle Apples.”

Fast forward to a sake brewery in Okayama Prefecture that was having a similarly difficult time growing good rice for their sake. They invited Kimura-san to work his magic in the rice game, and voila he started using a rice varietal called Asahi, which produced this sake called – you guessed it – Miracle Sake. Talk about feel great sake. This brew is thick, slippery, and extremely smooth. It has a rich sweetness with tones of apple, pear, and vanilla that drinks very well balanced and relaxed. Is it a miracle – I dunno! But it sure drinks great.