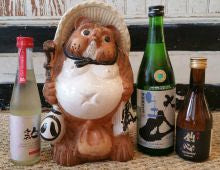 Drinking great this year! Balanced with fresh flavors on a fun and bouncy Nama flow. This is a drink it now brew for the full and tasty effect of a seasonally released sake.

Another crisp and fun sparkling sake for the portflio! This brew is crisp and bright and does so well in a Champaign flute. Very well balanced and basically a clever party in the glass!

We love this new Junmai, because it speaks on a lot of different levels. It has a very traditional Junmai taste, but it is far smoother and rich than traditional Junmais. And take a look at that acidity level! What is that countering? Lots of wonderfully rich flavors for a well-balanced brew. Good at three temperatures.