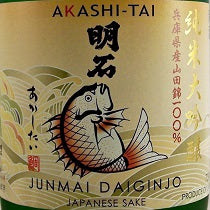 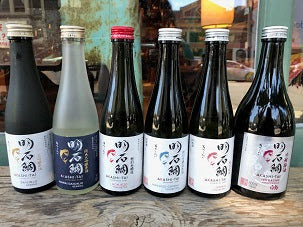 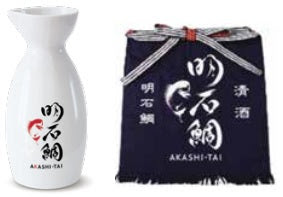 Hi Everyone!
Mei here to announce for every in-store purchasesof the Tokubetsu Honjozo and Ume-shu, we will be giving away a free Akashi-Tai sake carafe! Due to limited supply, only one carafe per person. For purchases of the the Junmai Daiginjo Genshu, you will be entered in a raffle for one of the two sake aprons. Entries will end September 20th and winners can pick up at our store or mail the sake aprons to your preferred address. Raffles are not limited per person and is open to online orders. Kanpai! 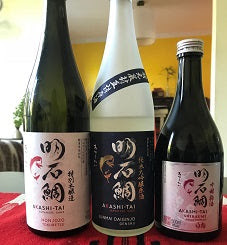 Akashi-Tai
From Hyogo Prefecture. Junmai Daiginjo Genshu. SMV: TBA Acidity: TBA
The nose on this very unique sake is a gentle collection of burnt vanilla, melon, koji rice, and orange peel aromas. If you like to wade through complexity in a glass then this Daiginjo that has been milled to 38% is perfect for you. It is both a mystery and a celebration in a smooth, velvety, round and slippery fluid that finds the entire palate. It is a 16% genshu (undiluted), which gives it body and personality. There are many peek-a-boo flavors such as vanilla and orange, which combine to make a cream-cycle like experience. It is slightly citrus fruity, but drinks more on the dry side. There is a very professional complexity to this brew, which means it’s hard to put your feeling on certain flavors. The bottom line is that it excels in a wineglass, and is ready for those who like to explore the unknown. WORD: Complex WINE: Deep reds/fat whites BEER: Chewy creamy ales FOODS: Seafood, international spiced fare, and veggies/salads.
$71/720ml