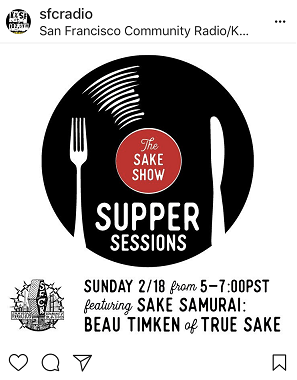 Doing radio sake interviews is always fun. Years back, I used to do several with SF’s very own Gene Burns “Dining Around.” Recently, I was asked by Brian Springer of Epic Wines and a fearless DJ at KXSF.FM to do a show about sake and food pairings! A topic that I am seldom at a loss of words. Joining Brian and myself was the awesome Darin Schlom from Classic Wines out of Denver who flew in to visit friends in SF and do some food and sake talk. Darin went first and when I came into the studio she was killing it talking about sake in general. It made me smile, because she was so on point and I got to sit there and listen despite Brian’s insistence that I put on the headphones and mic up. 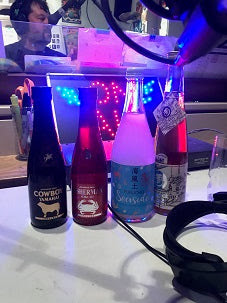 It was a fun show! The team at True Sake had the program on in the store and we all did the Lord’s Work! I decided to bring a couple sakes from my past and something I had been given that week to do an on-air tasting which is always silly, but entertaining nevertheless. Many years ago, perhaps even over a decade, I was witness to a Fushimi brewery at a sake show that had blue cheese on the table to accompany their sake. So I took a chance and tried to replicate this pairing without actually tasting it myself before hand! Ballsy? No, just confidant that the Tamanohikari Junmai Daiginjo made with Omachi rice would still rock the cheese! It did and both Brian and Darin said it was an amazing pairing. Woot! The next brew was brought to me from Japan from a friend who said it was a perfect sake for pairing with chocolate. So with a little Nutella cup in hand they both tasted the sake and the chocolate and agreed that it was a very good pairing as well!

We then went on to discuss bigger and more meaningful pairings of sake to western fare. Pretty much it was a great recall of my many “Sake Challenges” that I have been doing over the years by bringing sake to western restaurants. You can find these Sake Challenges in the archives of the True Sake Newsletter on the website. Radio is fun, so is sake, and it was a very nice evening!