“Ask Beau” – “Did we hear about True Sake in the news for your window display?” 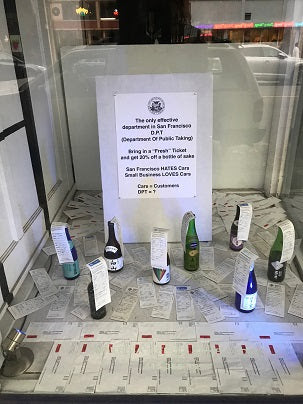 Guilty! Many of you know that I greatly enjoy doing the window display at True Sake for the past 16 years. It’s been a great way for me to try and release my creativity monster from within. And to be honest I greatly enjoy it. For over a decade, we have had many passer-bys stop in the store and say, “We always love your window displays” or “Another great window!” And this is cool for me, because I try to take sake to a new expression or direction with each window. Rather than just show cases of sake or whatever you would find in a Bevmo display, I try to make a sneaky or tricky point using unusual props and highlighting the display with something sake related.

I stay away from political windows, but I also hate “The man”! So I sometimes do windows that express what many San Franciscans might feel but don’t have the ability to show. I sometimes point out injustices or stick it to “The Man” , which is usually the City of SF’s Board of Supervisors, and the local government’s actions. And yes, I do it with a little flare or a slight that makes many take to social media to agree or disagree. A few years ago, my window displays were favorably written about in the San Francisco Chronicle newspaper. That felt pretty cool.

Sometimes the team at True Sake must run point on my windows when folks pop their heads in and say, “What does it mean?” or “Can I buy that so or so prop?” Do Inflatable Turkeys mean anything to you? Well, we’ve done windows with inflatable turkeys and cans of Turkey Spam, and customers and folks passing by have asked if they could buy both. Weird things like that!

The current window has been a doozy! Basically I wanted to vent about how over-aggressive meter maids give way too many tickets to drivers in our neighborhood and all over SF. I also claimed that these people were the only effective department in SF and that the city HATES cars. Which is true. When you punish drivers by over-ticketing them you detour them from driving to small businesses like True Sake and spending money. I wrote that Cars = Customers and that small businesses love cars. Well, you can imagine what happened next. First, many people agreed that the city is way too aggressive in ticketing and that people with cars are not the enemy. And then there was a push back by people who actually do hate cars! Go figure. 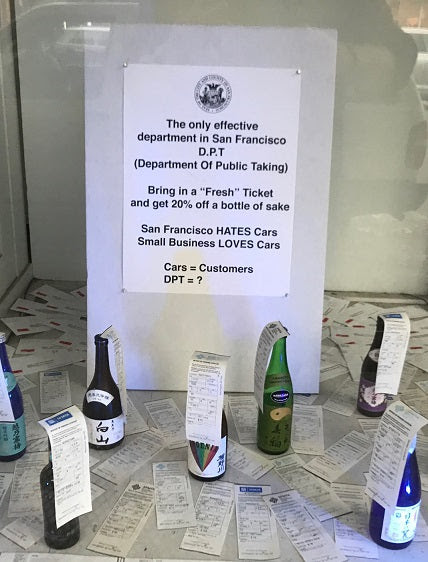 A first several social media sources covered the window, and then a TV reporter called and wanted to talk to me. But I don’t like talking about my creations. I let the window do the talking, but this wasn't enough for the reporter who showed up in a TV van with cameramen etc. They came into the store and she asked if I was the owner “Beau Timken?” I panicked and said no that my name was John and that the owner would be back at 6:00PM. I said that at 4:00PM, and had to suffer in shame as the camera crew walked up and down the street interviewing people and businesses about the window waiting until the owner returned. Let’s just say that I was very embarrassed and pissed at myself for fibbing and I eventually ‘fessed up when she returned. I kept myself off camera and off the record, and told her the whole story. She actually was in full agreement with my visual protest.

I should actually show more of the window displays on Instagram, which pushes them to FB and Twitter so you all can see these incredible works of wonder! Or not!