“Ask Beau” – “How has the ‘Organic’ sake movement evolved in the past decade?” 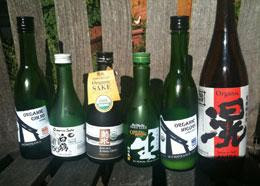 So I looked back in the True Sake Newsletter archives and found an article I wrote nearly a decade ago about guess what?

For years now I have been telling you folks about the whole "organic" deal in the sake industry and how it relates to us. I've mentioned countless times that the Japanese standard for the "Organic" seal is not recognized by our very own USDA. Meaning - it's considered organic in Japan but it cannot be "sold" as organic in the US. Why? Go ask your government.

And for years now we have been selling certain sakes by telling our customers that several brews are organic or use organic rice etc. (Daishichi Kimoto Junmai for example) We also know our brewers very well and when they relate to us the fact that they produce all of the raw materials from start to finish under pure organic methods then we also say that these brews are "organic" (Chikurin Brewery for example). In other words, the Japanese organic standard is good enough for us as retailers of premium sake. Or is it?

Of late this discrepancy between the US and Japanese organic standards has opened a small niche in the industry and there are several breweries running like mad to gain market share within this fledgling segment. And they are doing it in the most crazy manner possible. Two breweries in Japan - Kikusui in Niigata and Hakutsuru in Kobe - are actually growing special brewing rice in the US and shipping it back to Japan to be brewed and bottled. These sakes then get shipped back to the US and the result is that they get to have the USDA Certified Organic sticker on the label. Seems nutty right?

That's a lot of effort to get a simple sticker no? Well yes it is and now there are several breweries that are petitioning the US to send inspectors over to Japan to monitor their organic methods to prove that they are in accordance with USDA standards and should be rewarded with the all-sacred USDA Cert sticker. In other words there is a rush to get into a segment where they see value. But is this really a viable segment? Do people buy sake just to get organic sake? Is the organic premium really worth it? Hmmmmm? Several of our local brewers in the US think so and have been doing USDA organic products for years.

Is this the tipping point? We do get asked quite often by breweries in Japan if people want organic sake. And some folks come to us saying that they are going to export to the US a fully organic sake, and would we carry it. (Miwa wrote about one such brewery that actually flew her to Japan to see the operation). Their business plan is to export one organic sake. Hmmmmm! Me thinks this is not the best business model - a one brew portfolio based on an assumption that Organic sake would sell more than non-organic sake.

Let me be clear here. I cannot speak for you, but I get the sense that there is not a large desire to buy USDA organic sake, especially from an industry - sake making - that is not known for using all of the BS chemicals and enhancers that bring fear to the very soul of most consumers. The sake producing world is pretty clean and the rice is so special that it cannot possibly be too tricked out or over- chemical(led).

The final factor comes down to price. Would you pay more for an organic product? Would you pay a premium for a brew that has the USDA Organic sticker on it? I guess some would. But in my experience and watching the buying patterns of sake purchasers most people buy like frogs hopping from one brew to another - rarely do they settle down for one sake only. Thus, a single organic brew as your staple sake seems unlikely. Even if that sake was supposedly "better for you."

"Organics" have come to us in every realm of life - so why not sake? I still do not think that the organic seal of approval is so very needed in an "industry" that is pretty damn pure and clean to begin with. But it's there and people are counting on consumers to produce a demand for these products based on that selling point alone (no matter the quality). And yet, quality does matter and some of the efforts out there are not really the end all be all - are they? So it is a line that we will watch more closely - the line of whether or not people will pay for a product that may not be excellent sake just to achieve the "organic-ness." Personally speaking I feel the answer is a "no way" for now, because as I mentioned before most consumers jump from product to product and rare is the customer who just drinks one or two brews only.

I featured a brewery Tsukinoi Nanotsuki 80 in last month’s Newsletter in the Beau Zone section that fundamentally believes in Organic sake as being healthier and a better brew for you and your life. They do things extremely organically and extremely well! It’s a selling point philosophy for their brewery. But they are not alone. In fact most breweries do exactly what they do, because sake making is pretty damn organic to begin with. So the proof is indeed in the pudding because 9 years later we rarely get a customer coming in asking for organic sake. Maybe it’s because we as retailers tell the customers that sake is made organically and it is, and that you don’t specifically need a USDA certification.