Last month I told you about a truly amazing Junmai Daiginjo that is Exclusive to True Sake called Miroku! This month I will tell you why you should try this sake and soon! First let me remind you that food and sake are conjoined twins in a manner of speaking! Sake goes with food and food goes with sake! And I am not just talking about sushi! 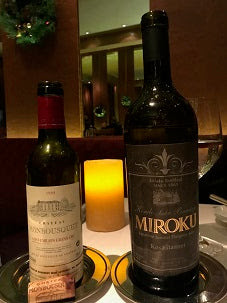 Making sake is an awesome act! And those who make sake are amazing people! And these amazing people like to eat! Go figure! And many of these sake makers live in areas where certain foods are abundant and excellent. So by default many of these amazing sake makers make sake to pair with cuisines that they personally love. They craft sake to work well with the flavors and feelings that they enjoy, and the result are sake that specifically rock with certain shellfish, veggies, game, fowl, fish, crustaceans, and other seafood specialties.

The Sake Challenge was a creation of mine that I used to write about quite often in the newsletter. I would take a cool person who is in the sake industry or is a chef or foodie and we would bring two or three sake to a western restaurant to pair with foods of all types. The ultimate goal was to bust the myth that sake only goes with sushi! WRONG! As we explored it became so evident that sake worked in so many capacities, and actually was better than wine pairings in many instances! At the time I was pretty much on the cutting edge of trying sake with Brazilian, Moroccan, German, French, and even Mexican fare, and most of these reviews are still in our True Sake Archives if you are at all interested. As sake became more mainstream and as sake started to permeate the “foodie” scene I backed away feeling very good that I opened many eyes to the versatilities of sake in a western kitchen.

For over 15 years I have been bringing sake to the most unusual tables in the dinning world, and I learned a ton about sake and how they worked with different food types. What impressed me the most were the sake that I did not think would work that well and then they ended up excelling! And these facts had to be discovered, because nobody in the world knew. One shining example is a very simple and soft Ginjo sake from Kyoto called Mizunoshirabe that has an SMV of +5 and an acidity of 1.2! It’s a very gentle and uneventful sake that I totally believed would get bullied around in a restaurant that specializes in Napa cuisine called Range. This brew rocked my food world and had several World Class pairings and once I picked my jaw up off the table I realized that sake can do anything! 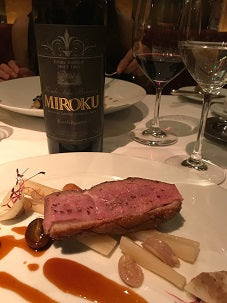 Now back to my new bestest food pairing sake buddy in the world! Several years ago, I was introduced to a sake from a brewery in Niigata called Kondo shuzo that is known all over Japan for being a stellar and emphatic brewery that made unique and dare I say killer sake! So I tasted their sake called Miroku and immediately I knew that I was not drinking a sake sake! It was and is a sake that is very much a Houdini sake that tricks and amazes you! When drinking it for the first time you can taste that is different, and some think that this “different” means that it isn’t great Daiginjo sake like other stereotype sake. It is smooth, neutral, round and soft. It doesn’t have edges like too fruity or too dry or too rich or too ricy! People say that it is light. They also say that it is subtle. But is it? It does have a lower alcohol level at 14.5%, which seems to be the new norm for breweries making sake to pair with western fare (Miyasaka Yawaraka).

The owner of Kondo shuzo is a huge fan of French cuisine, and his Miroku is made to pair well with French delights, including venison and that is why he put a deer on the label. So in my studies I decided to take Miroku to a French restaurant in San Francisco called La Folie. And in a word this sake just blew me away with it’s calm nature and deadly pairing abilities. We also opened a bottle of Bordeaux to do a little head to head, and in my mind the sake kicked ass. Back on the menu in San Francisco one can find Foie Gras once again, and let me just say that Miroku went silky smooth and balanced perfectly with the goose liver. The pairing harmonized incredibly well and the huckleberry reduction made the sake drink a touch more savory, which was awesome.

The next course was the Pig’s Feet and I almost fell out of my chair tasting the Miroku with several sections of the pig including a salted bacon bite that Miroku cleaned up deliciously and had a perfect mouth dance. Suddenly the semi dry sake drank with a rich sweetness that covered all of the pork savory flavors and created an amazing pairing that was confident and covering. The body of the sake rang out and you just can’t taste that by the sake itself! And voilà it dawned on me like a sack of bricks hitting my head – this brew simply excels with food and is more comfortable with cuisine flavors than simply by its excellent self! So it’s up to you to get the great flavors in the vicinity of Miroku! As there was no Venison on the menu I had to settle for the venison with wings commonly referred to as the duck! And again Miroku put on another mask of ability and changed into a rich sake that stood up to the duck and created a rich reserve of flavor that rolled to the back of the palate. I was stunned.

I’ve been around of sake pairings in my days, but what this sake can do is unlike any sake that I have ever tested and put through its paces! It is truly amazing and just a real treat to experience. So from now I will be selling Miroku as a great pairing sake that is up to you to pair with from the spectrum of all the cuisines out there. I’m just very lucky to be a part of this sake’s journey, and I am very proud to say that we are the only store outside of Japan that you can get your own bottle, case or two. It is a perfect gifting sake for any wine drinker and foodie on your list! And by all means help me document any pairing successes that you may have that we can add to this sake’s amazing pairing history!