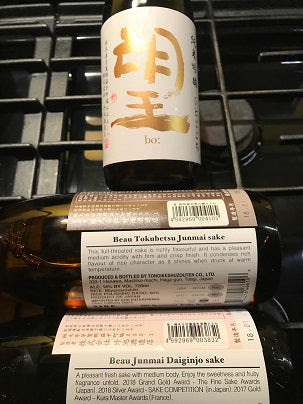 One of the fun offshoots of being in the sake industry coming on 20 years now is that you get to make great contacts who value your opinion and trust your judgment. In all these years I have personally “named” or “discovered” a dozen or so sakes that have gone on to become very popular brews! It makes me smile to know that I had some small part in the success of these special brews. Heck! I discovered the now number one imported nama sake into the US, because I thought it looked cool! (Narutotai Nama Ginjo Genshu) I named two sakes from the great Takenotsuyu brewery in Yamagata (Silent Snow and Bamboo Tears). I discovered an amazing Honjozo Genshu from Urakasumi, and got to name the Junmai sake (Aqua) in the killer line-up from Shirataki Jozen. I also coined the whole “Cowboy Yamahai” name that has done wonders for a great brewery in Niigata.

It’s fun and it makes me feel good. So you can imagine my surprise (shock) when I found out that a brewery was going to call a line of sakes “Beau,” in my honor! What the? Many of you know the Tochigi brewery called Tonoike Shuzo, because they have come to and rocked Sake Day two years in a row! Their first experience was purely exploratory in nature to see what the western market was like. They liked it so much that they came back this year for Sake Day’18 and we sold 6 of their sake offerings. I basically told the owner that he HAD to export to the US, and so we helped him find an importer for his two famous lines of sake. You probably know of them – “Sanran” and “Bo.”

When you hear that there is a brand of sakes called Bo, you sit up and take notice. Ha! So I got Shigeki Tonoike to come to Sake Day 2017 (He simply loves it and said that he will be back again for Sake Day’19), we found him an importer, and we have his sakes in store at True Sake all because of a connection that I made with a friend of his. And that is how sake works! Friends helping friends. So fast-forward to when Shigeki was registering his brews with our governmental agency to be able to sell his sake in the US. He thought it would be a good idea to honor me by changing the name of his brand to “Beau” instead of “Bo.” Aaaaaaaaaaaaaahhhhhhhhhhh! It totally freaked me out and I quickly emailed him to say that I was honored, but it was a big mistake. I said, “I love brand names and not my name on great sake.” And he quickly agreed. So phew! We dodged a bullet and his wonderful line of sakes won’t be called “Sanran” and “Beau.”

I will write a little more about the “situation” we have with Tonoike Shuzo, because they have registered 6 sakes, but the importer/distributor only wants to carry or rep 2 or 3! What does this mean to you? It means that we have two cases each of all six sakes in the store right now, and you would be wise to snap them up immediately. These sakes were by far the fan favorites at Sake Day’17 and ’18 and it’s such an honor to have them at the store. But since the situation is fluid, I need to bring more attention to the Sanran & Bo lines and will do so in the next newsletter.