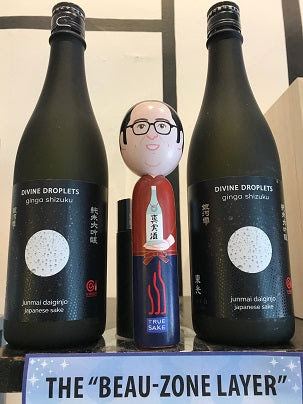 Ginga Shizuku the original version was an industry pioneering sake that blew the sake market away. From the Shizuku technique to the ice dome used to produce it Ginga Shizuku was a total winner! But sometimes things happen in the sake world that we cannot explain, and this brewery sold to a group that no longer wanted to make this amazing sake that had killer brand recognition for the past 15 years. Fast forward to two years ago when the good folks at Vine Connections (sake importers) sealed a deal with a legendary Yamagata brewery (Toko) that has been making superb sake since 1579, and made kick-butt Shizuku style sake. Labor intensive as hell, but a totally amazing technique that gives high-end sake and even more high-end feeling and flavor profile. The old Ginga bottle used to be frosted white, but the color of the sake changed making the bottle look yellowish after 6 months. Behold the new “Ginga Shizuku” (Galaxy of Stars) from Toko brewery and get ready for one of the best white wine glass sakes in the business. This baby has a vivid aroma field, and drinks like a dream. Sometimes change is really good! And this is the case with this born again brew that is a super star in the sake galaxy!