I am so stoked to type the following sentence:

We are adding another American-made craft sake to our True Sake portfolio and you’re going to love it!

Literally from a neighborhood of Los Angeles (the Sawtelle area) comes a little can of awesomeness that is very good for sake lovers and the history of sake itself. Made with Yamada Nishiki sake brewing rice from Japan – NOPE – from Sacramento, California this craft sake is a glimpse of both the past and the future of sake in one little tasty ameriCAN.

Roughly the size of cup sake this 200ml can is perfect for sake on-the-go and going places like concerts, picnics, camping, the beach, the train, and your favorite casual dining location. 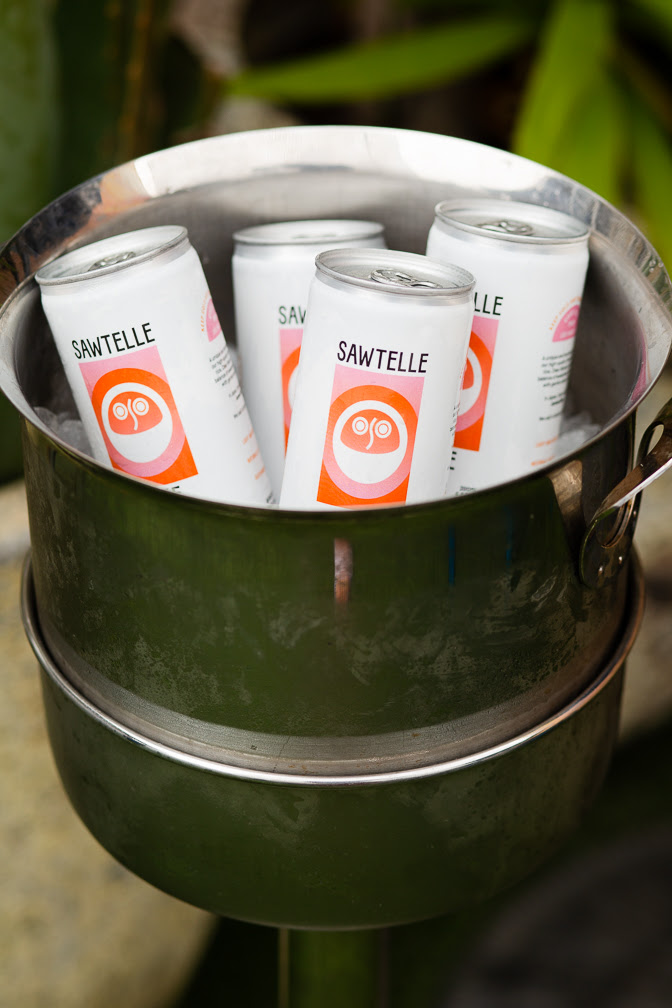 When I review a sake you all know the routine, I use three different sized glasses, and come up with a consensus of aromas, feelings, and flavors. So when we tasted this as a team we used glasses to enjoy and explore Sawtelle, as we do for all brews. But wait! We forget to try it out of the can mouth. Thank you Chika, who said, “I poured a little back in the can to try it out of that opening.” Well done, because it really shined a light on the way that this little can of magic works. And the coolest part is that it drinks professional and casual depending on a glass or the can itself.

So who’s the man behind the can?

Troy Nakamatsu is the Owner and Toji of Sawtelle, and after our review of his Nama Junmai Ginjo please enjoy an interview of Troy by our very own Chris Cabrera, who ran point on bringing Troy into our True Sake Family.

The nose on this perfectly packaged unpasteurized sake is a great collection of powdered sugar, lemon, mineral, apple, and pear aromas. Say hello to ameriCAN sake that is made with the Californian grown Yamadanishiki brewing rice that some say is the king of all brewing rice. So, basically this is two sake in one! Huh? Yes, it literally is two amazing chapters in the same glorious rice and water book. Chapter 1 is a can sake that you crack open and taste living and lovely semi-sweet, lush, chewy, viscous, bright flavors such as apple, lemon, peach, sweet stone fruit, strawberry and rock candy tones that drink expressive, fun, and is the perfect picnic, camping and ball game sake. Chapter 2 is pouring this excellent Junmai Ginjo sake into a wine glass that shows the depth and complexity of this premium sake that is round, full-bodied, with a little astringency (Shibumi). When in the glass the flavors such as pear, peach, apple, tangerine, and mango round out and drink more Ginjo-like. The can keeps the sake colder longer and makes for better food pairings like street fare, which is cool because this brew was named after a thriving Japanese American district in Los Angeles, California. WORD: ameriCAN WINE: Lively Reds/Fat Whites BEER: Fruity Ales FOODS: Picnic, pub, camping, and ballpark fare. $6/200ml

Chris from True Sake: So, I want to find out more about how Sawtelle Sake started. What is your "origin story"?

Troy from Sawtelle Sake: I started off homebrewing doburoku with table rice and koji I was able to get at my local Japanese grocery store. Over time, my brews became increasingly complicated to the point I was hand-making koji and experimenting with the sandan-shikomi method. Despite my interest in homebrewing, I had a good job at the time and brewing sake for a living was just a fantasy I daydreamed about. But the idea of branding and selling sake in a way that was easier for American drinkers to understand was something that frequently struck me as a good business opportunity. C: Yes, we try to make sake easy to understand and accessible to Americans everyday at True Sake. We're right there with ya. When was that "a-ha moment" for you when you decided you wanted to take the next step up from homebrewing?

T: In early 2018 I was in Nara with my wife and a friend from the area and we ended up touring the local sake brewery, Umenoyado. It was the first time I experienced a small-medium sized sake brewery and it was a surprisingly profound moment for me. Seeing sake production on a smaller scale really sparked my interest in starting my own brewery. For the first time it seemed possible. We ended that day at the local shrine, Omiwa Jinja, which is not only one of the oldest shrines in Japan, but is considered to be the birthplace of sake, where sake was thought to be handed down to mankind from the deity of the mountain. Having no idea where I would visit that day, I ended up praying for good luck at Ikuhi Jinja, a sub-shrine dedicated to toji. No way to know but I like to think that visiting that shrine that day helped me pursue my passion for sake.

C: The Sake Gods definitely heard you that day.

T: The next year, I quit my job and launched Sawtelle Sake with my business partner. We named it after my neighborhood, Sawtelle, which is one of four official nihonmachi in the U.S. and was one of the only areas in LA where Japanese immigrants were initially allowed to settle. Early immigrants worked in the farms and nurseries that were scattered across the west side of LA at that time. Now, thanks to the incredible Japanese community still in the area, the Sawtelle neighborhood is known as one of the best places to eat in LA. C: Facts. Sawtelle has always been synonymous with the Japanese American community. I used to go to that Nijiya on Sawtelle when I lived in Southern California. Can you tell me more about your brewery setup at Sawtelle?

T: From the beginning, we were extremely fortunate to be able to co-locate our production with a distillery run by friends. I think we are the only sake brewery to be co-located with a distillery in the U.S. There are several reasons why this arrangement is not exactly ideal, but it really helped us launch much faster than going at it from scratch and I've been able to learn a tremendous amount in a relatively short period of time. I've borrowed a lot from the spirits world and our brewing system really shows it. How we generate steam, most of our tanks, our press and even our pumps are nothing like what you would expect to find in a typical sake brewery.

C: I always say that the best inspiration comes from outside your industry. So the fact that you borrowed ideas from the spirits world makes sense to me. What is your approach or philosophy on making sake?

T: Besides the fact that the equipment looks a little different, I take a traditional approach to making sake. "Ichi-koji, ni-moto, san-tsukuri" is the code I try to base everything around and so most of what I do is as close to modern Japanese technique as possible. The exception to this is our rice. California's Central Valley is a special place with a distinct ecology and growing season. So my ultimate goal is to use Japanese techniques to express the unique flavors of our locally grown rice.

As an American brewer, I feel that there is a lot to prove before American sake is acknowledged and accepted. It's a huge challenge and it's probably why I've almost exclusively focused on our Clear Skies Nama Junmai Ginjo. I wanted to be able to achieve a solid junmai ginjo before attempting to do anything else. The temptation is definitely there but it's important to me, especially as an American brewer, to not cut any corners at this stage. That being said, we definitely have plans for many other delicious products in the future! C: Very interesting. I feel like most American brewers I meet come from beer brewing backgrounds. Can you share with me some stats about your sake "Clear Skies?"

T: Clear Skies is a Nama Junmai Ginjo made 100% with California Yamada Nishiki milled to 60% and yeast #9.

C: Thank you so much for your time, Troy! We are very excited to carry Sawtelle Sake!