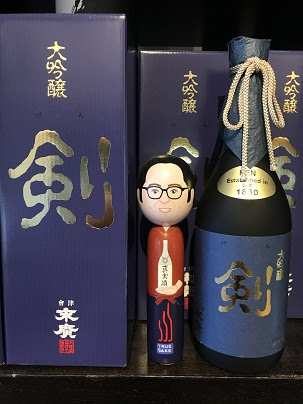 I’ve been selling Suehiro Brewery’s Daiginjo called “Ken” for almost 20 years. And this brew hasn’t changed an inch or a second or any other measurement in all these years. It is constant and it is a cold-blooded killer! You see Ken means Sword and this cutting brew has always lived up to that billing as it is cutting clean, crisp, and balanced through and through. Sure, it has that Fukushima pop, which is almost a legendary prefecture trait that announces the brew has entered the palate, then it gets light and buoyant in the middle, with a super clean finish that drinks like the sound of a sword cutting the air. I went to the brewery last year and met President Shinjo Inokichi, who became Shacho in 1976, and he showed me his cellar of decades and decades-old bottles of Ken and other Daiginjo sakes. He wanted to impress his father so he focused on Daiginjo sake when he took over, and Ken is one of his hallmark brews in one of the oldest breweries in Aizu Fukushima. Ken would make a great holiday gifting brew, but don’t forget yourself.