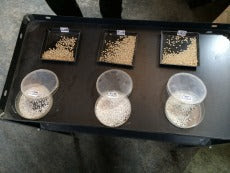 He wanted to know if the western sake world had evolved enough that customers purchased their sakes by rice varietal as the only factor. I first asked him if he perceived Japanese customers in Japan as doing the same, to which he shook his head, no! He said that he wished that consumers would buy sake by the rice varietal, but that it doesn't happen that often and only small connoisseur sake clubs focused so much on just the rice type.

I think in all the years that I stood behind the counter that maybe 5 or 10 people in total wanted to taste a rice varietal as the reason why they wanted to buy the sake. And yes I refer to these folks as I do myself – sake freak! (Or diluted down, sake geek). It happens! Sometimes a customer will ask why two different sakes have the same sticker on them. In this case, it was the Dewasansan sticker which is a rice varietal from Yamagata Prefecture which breweries such as Dewazakura and Takenotsuyu use to promote the varietal in the sake market.

Several years back, some people were on an “Omachi” rice varietal kick and they wanted to try all the sakes that we had made with Omachi. But, other than that, we rarely get customers asking for sake specifically by the rice varietal. I think for the next newsletter, I will make some rice-varietal-only sake sets so customers who are interested can actually purchase sakes with the same rice varietal and you need not be a geek nor a freak to taste good sake made with the same good rice!