In November, I did a whirlwind tour of 6 breweries in Fukushima Prefecture sponsored by the Fukushima Government. I’ll write about each of the breweries visited and the special connection that I discovered about Fukushima sake, but will start with one of my now favorite big sake breweries. 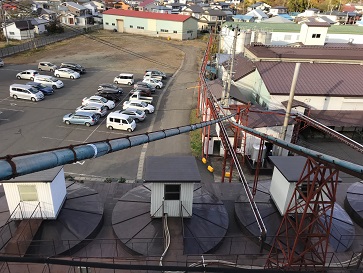 Sakakura; or sake breweries, come in all shapes and sizes. Some are very small and produce quite small quantities of handcrafted sake. And some are quite big and produce large amounts of machine-made sake. Wait! Did you say “Machine-made sake?” Yes I did! Actual mechanized-made sake that is delicious and should not be pre-judged or pre-determined. This begs the question, “Can machines make sake as well as human hands?” The answer is yes, of course, but it’s relative.  And that is why I enjoyed my trip to Aizu Homare, where I saw one self-stirring moromi tank of Junmai Ginjo sake that contained more sake in that one tank than the total annual production of Ginjo sake of some small breweries.


First, let me define large. Large is a brewery that has 69 employees. Large is a brewery that produces 1,800KL of sake, 400KL of shochu, and has net sales of 1,450 million Yen, that’s roughly $13,165,301 USD (July 2019). Those are big numbers. They make sense when you walk around the 4 story brewery that shoots rice to the top floor so they can use the gravity production method that keeps moving more completed product down to the ground floor storage tanks. Large is the sound that you hear in a large brewery of the constant movement of things churning, whooshing, clanking, turning, and beeping. But I never once forgot that I was in a sake brewery, because all of the tools of making sake were the same just larger, a lot larger. 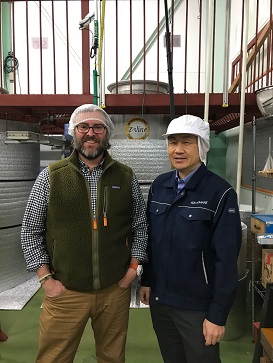 Making sake is the same. It’s called the business of 10,000 methods, but basically they are doing the same thing - taking rice from a solid form and converting it to liquid. I’ve been to many very small breweries, where this is done quietly and compactly with a handful of brewers, and that is why it was so refreshing to see this not so simple act in a large production format. 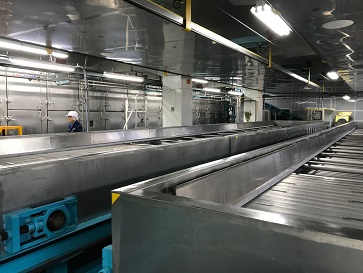 Most of the tools were the same, just larger, and some were unique, very unique, like the largest koji-making machine in all of Japan. I had seen one before. In fact I met the inventor of this large koji-making machine in his brewery in Yamagata Prefecture called Ohyama. I pointed this out to a surprised Hiroyuki Karahashi, who is the President of Aizu Homare, and he said, “Wow, you know that? But did you know that this one is bigger and is in fact the largest one in Japan?” No I did not, but I do now! It was impressive. It filled an enormous room and when he was showing us the machine his head appeared so far away that I was amazed that the VERY sensitive business of making koji rice could be done in such a fashion.


As we descended from the top floor of the brewery down to ground level, I felt a sense of precision and control that you would find with a close group of brewers who were used to working with each other. But the automated version that had two rooms filled with computers and blinking machines that you would find on a Star Trek set also had a precision, one that was controlled by non-human hands. It was fascinating and all it needed were robots. And of course robots appeared in the storage area as they were used to lift large palettes of cases of sake. Cool!


When I had some down time with Hiro I asked him if it ever bothered him that people might consider his products inferior because they were not hand made craft sake. He simply said no. It didn’t bother him, because despite the fact that the sake market determines your worth by medals and trophies he said that wasn't the point of sake. Sake is made to be enjoyed. And he is so right. One of his products is a Strawberry Nigori. We can’t sell enough of it at the store and we are continually ordering case after case. People love it. Is that wrong? No it is not. He actually showed me his next effort in this regard, which is a Chocolate Nigori, and of course we will sell it when it hits the market. Check out our @truesake Instagram post where I showed pictures of the Chocolate Nigori.

But wait! In circling around back to his comment about people drinking sake for enjoyment, I wanted to point out that Hiro-san does have awards. His kura has been awarded 14 Gold medals at the Japan National Sake Competition, they have 7 Fukushima Governor Awards, and they won the Trophy at the International Wine Challenge in 2017. But wait there’s more. Aizu Homare also won a Gold Medal and a Trophy for their Daiginjo sake at the IWC 2015. Oh and they also happened to win the Grand Champion prize as well for being the best sake of the entire competition. And that is rad! As Co-Chair of the IWC, I never know what brewery we taste until the event is over and judged. And when I learned that Aizu Homare won the Daiginio Trophy I asked, “Who the hell is Aizu Homare?” And now I know! And it makes me so proud to sell their Trophy winning sake that is made in a big ‘ol sake brewery in Fukushima.